We are exiting at about 3.79 (or whatever the prevailing price will be on April 20th) for the reasons described in this video:

Yes, that will be a small loss (about -7%), but when conditions change that were the basis of our investment thesis, we must change, even if it entails taking a loss.

Why the exit? In short, the trend of deteriorating relations between Russia, the US and Western Europe.

While we believe Gazprom still offers significant value (it’s cheap on any fundamental metric), we can achieve better returns with less risk by investing in other oilers that don’t have similar geopolitical exposure… and where the risks of getting the rug pulled from beneath our feet aren’t as high. Take Tidewater as an example, which was the subject of our last Trade Alert.

We got a fright! The unthinkable/unfathomable happened! Trump, descending into a totalitarian state, took a disliking to Rusal and now the U.S. Treasury is requiring all U.S. citizens to exit Rusal securities (stock and bonds) by 7th May:

And bang! Fortunately we never owned it or even hinted at owning it but rest assured this will begin a process whereby asset managers and investors everywhere begin rethinking risk. 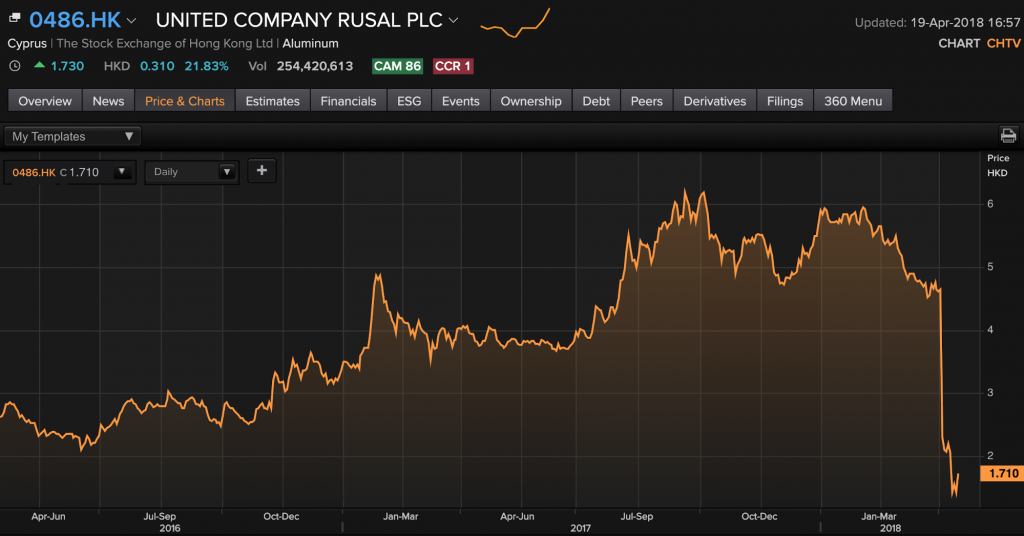 Effectively “Westerners” are now barred from trading in Rusal. I’m a New Zealand citizen (not U.S.) and none of the brokers I have (and I’ve got a bunch) allow me to place a trade on Rusal (even if I wanted to buy it).

Yes, this has taken us by surprise. It is the first time I have known where the U.S. has actually ordered citizens to sell a security or effectively banned them from owning an asset.

When we opened this trade relations between the U.S. (the West) and Russia weren’t good, but they seemed to be improving.

This was one of the foundations for opening the long position in Gazprom. The cluster of Hillary Clintonites were decidedly anti-Russian, and with Trump taking the pound seat and his apparent desire (at the time) to commence business with Russia we believed that such a possibility of more favourable relations wasn’t priced into the markets.

Now, today things couldn’t have gone much worse. Trump, for all his bluster, seems to be doing his damndest to prove that he’s NOT a Russian sympathizer and prove his “strong leadership”. It would be funny if it weren’t so damned serious.

Furthermore, in the last 12 months we have seen relations between China and Russia strengthen:

Russia’s 2018 presidential election, the conclusion of the 19th Party Congress in China, and the beginning of President Trump’s second year in office are creating new dynamics in the relations between Russia, China, and the United States.

Propelled by the close personal relationship between Xi Jinping and Vladimir Putin and their shared multi-polar worldview, China and Russia have deepened their strategic partnership through energy agreements, joint military exercises, and economic development in Central Asia through the Belt and Road Initiative.

The Trump administration’s recent designation of China and Russia as “rival powers” to the United States in its national security strategy, meanwhile, underlines the increasingly competitive, and in some cases adversarial, nature of their relations with Washington.

The whole affair isn’t helped by the U.S. placing sanctions on China as of late:

Clearly the geopolitical environment is very different now than it was some 12 months ago.

We anticipated correctly the breakdown in international relations and all that goes with it and we’re comfortable that we’re invested in the right sectors, but those need to be constantly monitored because this can (and probably will) get out of control in ways we’d not anticipated.

So we need to be both nimble and alert. This will mean not just looking for huge returns but increasingly limiting risk… because risk will be one thing that looks certain to rise.

In any event, we have a better feel for U.S. and European oil stocks as we have discussed in our two Oil Alerts in September last year and March this year. In addition, there isn’t a shortage of interesting ideas with big payoffs (and less risk than Gazprom) that I have been discussing as of late in “The Big Five” segment of the Weekly Insider.

In summary, we’re exiting Gazprom as the risk/reward profile has changed. The risks have risen materially with the breakdown in relations between the U.S./Europe and Russia, however, the reward (payoff) hasn’t changed materially in the last 12 months. So we exit and look for better risk/return profile trades.

The information provided in this publication is private, privileged, and confidential information, licensed for your sole individual use as a subscriber. Capitalist Exploits reserves all rights to the content of this publication and related materials. Forwarding, copying, disseminating, or distributing this report in whole or in part, including substantial quotation of any portion of the publication or any release of specific investment recommendations, is strictly prohibited.

Participation in such activity is grounds for immediate termination of all subscriptions of registered subscribers deemed to be involved at Capitalist Exploits. Capitalist Exploits reserves the right to monitor the use of this publication without disclosure by any electronic means it deems necessary and may change those means without notice at any time. If you have received this publication and are not the intended subscriber, please contact [email protected].

Capitalist Exploits website, World Out Of Whack, Insider, and any content published by Capitalist Exploits is obtained from sources believed to be reliable, but its accuracy cannot be guaranteed. The information contained in such publications is not intended to constitute individual investment advice and is not designed to meet your personal financial situation. The opinions expressed in such publications are those of the publisher and are subject to change without notice. The information in such publications may become outdated and there is no obligation to update any such information. You are advised to discuss with your financial advisers your investment options and whether any investment is suitable for your specific needs prior to making any investments.

Capitalist Exploits and other entities in which it has an interest, employees, officers, family, and associates may from time to time have positions in the securities or commodities covered in publications or the website. Corporate policies are in effect that attempt to avoid potential conflicts of interest and resolve conflicts of interest should they arise, in a timely fashion.

Capitalist Exploits has affiliate agreements in place that may include fee sharing. If you have a website and would like to be considered for inclusion in the Capitalist Exploits affiliate program, please email [email protected]. Likewise, from time to time Capitalist Exploits may engage in affiliate programs covered by other companies, though corporate policy firmly dictates that such agreements will have no influence on any product or service recommendations, nor alter the pricing that would otherwise be available in absence of such an agreement. As always, it is important that you do your own due diligence before transacting any business with any firm, for any product or service.